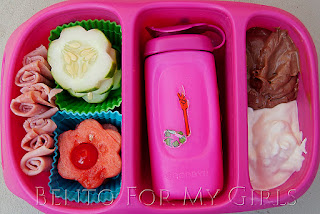 I have been making my own yogurt for a while now.  I had found some recipes online for crockpot yogurt then sort of tweaked and morphed them into something that works well for me...consistantly.

I pour a gallon of milk (I usually use 2%) into a large pot and heat it on medium heat until the milk reaches 185 degrees.  I pour it into my crockpot from there and stir in about 1 c of nonfat dry milk (this is optional).  I leave it uncovered until the milk reaches 110 degrees.  At this point I stir in 1 single serve container of plain greek yogurt (make sure whatever brand you are using has active live cultures).  Then I cover it and wrap the crockpot in a blanket and leave it undisturbed over night.  The next moring I have a crockpot full of yogurt!  At this point I strain mine because I like a thicker greek yogurt consistancy but again this is optional.  Store in the refridgerator.

For the chocolate yogurt that I made today, I didn't measure anything so bear with me.  I took out one of my cereal bowls.  I filled the bottom with dark chocolate chips and microwaved it at 30 second intervals until is was melted.  I took about 2 C of plain yogurt and flavored it with Torani s/f vanilla syrup.  I mixed about 1 C of the flavored yogurt into the melted chocolate until it was all well combined. I did a half and half in the bento and then took the rest and layered it into push pop molds for the rest of the week.