The Universe is Conspiring Against Me!

So the first week of school has come and gone.   I made and photographed lunches.  I set aside time today to blog them and I can't find the cord to transfer my pictures to the computer!   As I mentioned back in the Spring,  I took a new position at work.   I am at work 45+ hours a week, but I'm on call 24/7.  I make D's lunches because I love to and well...she needs to eat!   Photographing and blogging them has become increasingly more difficult.   I am going to try to work out a system that fits my  schedule because I miss blogging!

I have some Italian cold cut spread, pretzel spoons and fruit.


I have ham and turkey, cheese, cream cheese stuffed baby bell pepper wrapped in bacon and some grapes.

Day 497 - Spinach/Chicken salad with tomatoes and cheese, salsa/yogurt dressing, orange and 1/2 a cupcake.


I have potstickers, spinach, asparagus, soy sauce, an orange, some trail mix and an amaretti cookie.

Day 496 - Grilled cheese sticks!  These are one of D's all time favorites!  I always know that her lunch box will come home clean when I make these!  She has grilled cheese sticks, pizza sauce, grapes, pineapples and a couple of cookies.

Day 495 - D has chopped cold cuts on a salad with cheese, in the bottle is some Greek dressing.  She also has chopped apples, grapes and 2 mini milky ways.

I have Chinese sausage on a salad with pineapples and oranges.  I have sesame ginger dressing.


I have chicken and kidney bean salad, with crushed red peppers, 1/2 cupcake and an orange.

Day 492 - Chicken taco salad in a stand up soft taco shell.  D loves those stand up soft tacos and they make a great edible divider!  In the taco shell she has lettuce, chicken and cheese.  The mini dipper has salsa for dressing.  She also has some grape tomatoes, orange wedges and coconut tapioca pudding.

I have grilled chicken, hummus, pita chips and an orange.

Yesterday was D's birthday!  For lunch she got her birthday cake peanut butter sandwich decorated with Wilton Cookie icing!!

I have Italian calzone and a couple of cookies.

I have Italian calzone, s/f vanilla pudding and cinnamon apples.


I have tuna, bugles, orange and some grapes.


I have the same lunch but with black beans instead of tomatoes.


I have tuna, melba toast, brownie goldfish and some grapes.

I have chicken salad with melba snacks, coconut chips and a clementine.

Day 483 - Pretzel Dog bites. I saw these on Pinterest and had to make them.  Well I sort of made them.  I was lazy and used pizza dough that I had on hand....do yourself a favor....make the dough.  Pizza dough is a bit too chewy.  Delicious, but chewy!  D also has ketchup for dipping, peppers and tomatoes, grapes and trail mix of almonds, coconut chips and chocolate chips.

I have pretzel dog bites too with some of the beer cheese which was amazing!  I also have grapes, a clementine and trail mix.


Day 484 - Lunchmeat "sushi", trail mix, grapes, peppers and tomatoes, trail mix.  D is on some medication that has decreased her appetite.  Lots of food has bee coming home.  I thought if I put it in a smaller container it would be less overwhelming and she may eat more....didn't work...lots of food still came back home.

I had pretzel dogs again because I was really the only one that liked them and I had a ton left to eat...I guarantee they would have been a bigger hit if I had used the dough in the recipe.

I had soup so I didn't take a picture of it.

I have leftover chicken, some melba toast, cottage cheese and an orange.

Day - 479 Ham sandwiches.  I cut out some mini ham sandwiches and decorated them with cheese stamped with a rubber stamp and food coloring.  D also has tri-colored sweet bell pepper slices, an orange and a cherry/dark chocolate rice crispie treat.

I have leftover grilled pork tenderloin, a soft pretzel, an orange and a piece of chocolate.

I have an italian cold cut spread wrap with some Bugles, an orange, cinnamon graham crackers and a piece of candy.

Today is a 1/2 day at school.  Since I'll be coming home early I'll just eat lunch when I get here but the kids do eat lunch at school.

I have my Italian cold cut spread with soft pretzels, chocolate covered craisins with pistachios and a clementine. 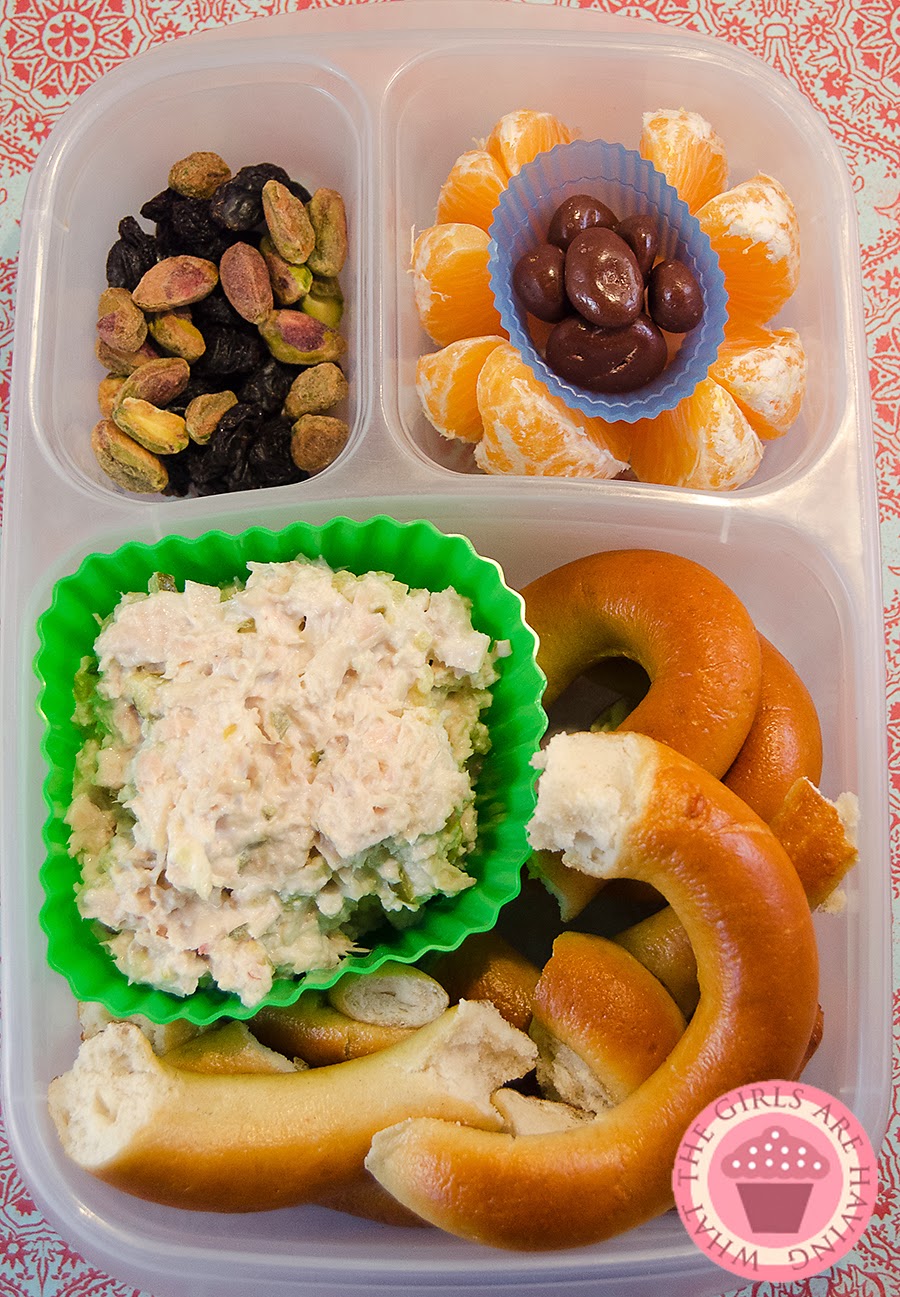 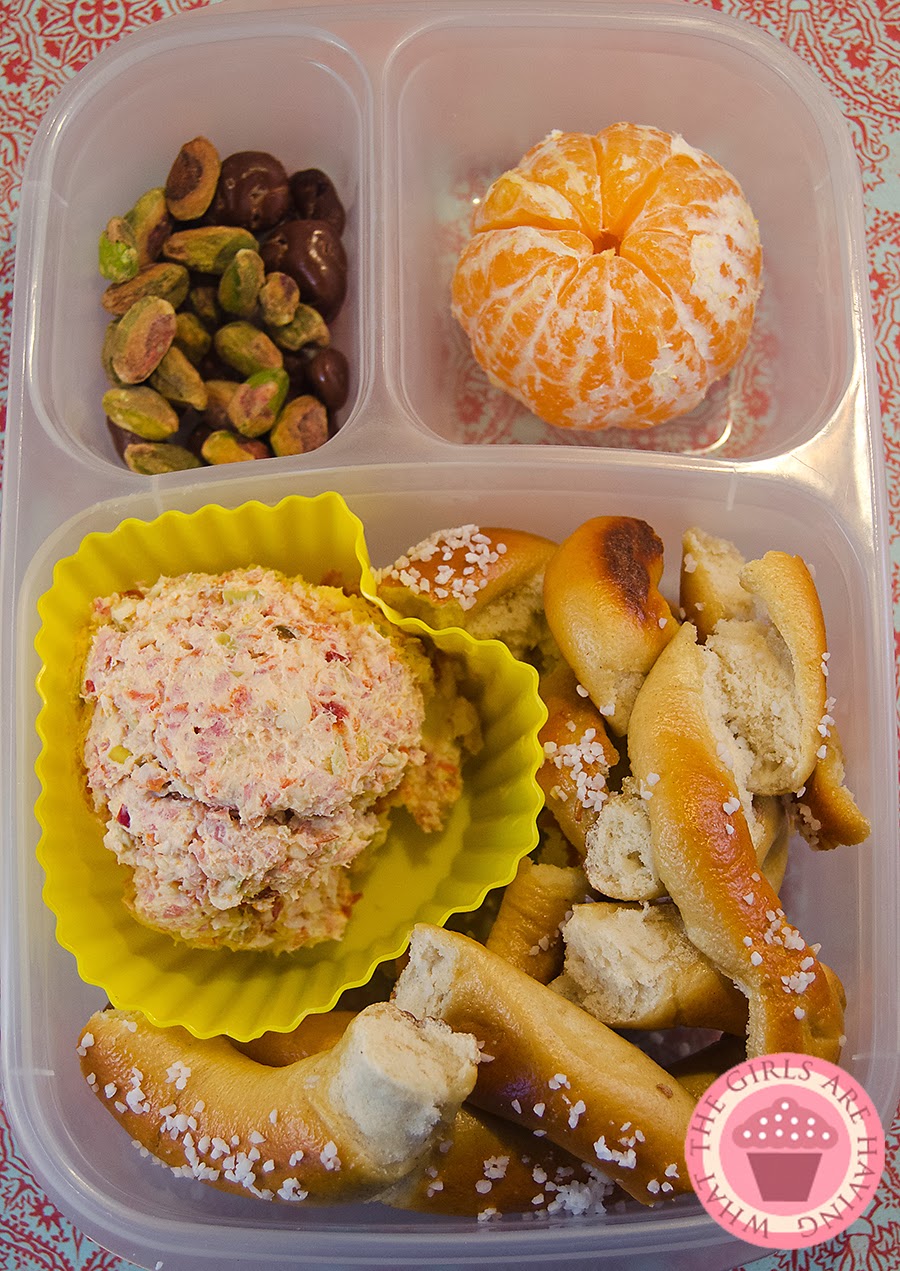 My lunch is similar except instead of tuna I have Italian Sub cheese ball.  I am obsessed with Italian cold cuts and pepperonici lately.  I didn't have enough cold cuts to make a calzone so in my food processor I pulsed a couple slices of ham, salami, pepperoni and provolone until it was finely chopped.  I moved that to a mixing bowl.  Then I put in about 5 pepperonicini with stems removed and finely chopped those.  I mixed all of that in with just enough cream cheese to hold it all together.  It still wasn't spicy enough for me so I added a heaping spoonful of crushed red pepper (sub sandwich style not dried).  I used a knife to spread it on my pretzel....AMAZING!! I think I would make this for a party...You could form it into a ball and roll it in crushed garlic croutons or maybe parmesan ones!
Posted by Unknown at 2:43 PM 1 comment: